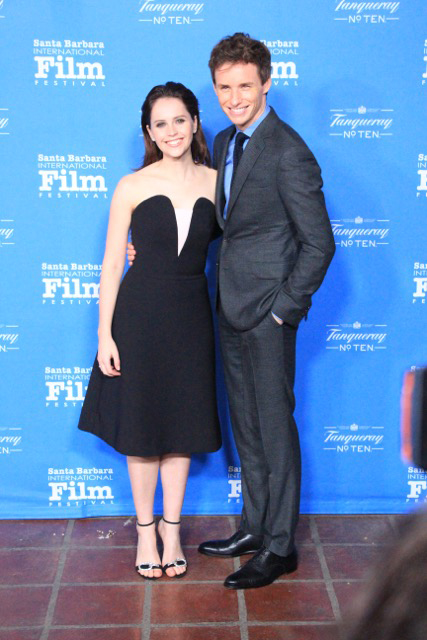 Santa Barbara, CA - The Santa Barbara International Film Festival, presented by UGG® Australia, will jointly honor Eddie Redmayne and Felicity Jones with the Cinema Vanguard Award on Thursday, January 29, 2015. The actors will be celebrated for their remarkable careers, including this year’s Focus Features release The Theory of Everything, with a tribute at the Arlington Theatre during the 30thedition of the Festival, it was announced today by SBIFF Executive Director, Roger Durling.

Commented Roger Durling, “These two actors continue to impress, and we are honored to have them at SBIFF to celebrate their fantastic body of work. Eddie Redmayne and Felicity Jones’s performances together in The Theory of Everythingare nothing short of an astonishing collaboration, recalling the alchemy of Daniel Day-Lewis and Brenda Fricker in My Left Foot.”

Mr. Redmayne and Ms. Jones have each received Golden Globe and Screen Actors Guild Award nominations for their portrayals of Stephen and Jane Hawking in The Theory of Everything, directed by Academy Award winner James Marsh (Man on Wire). Adapted by Anthony McCarten from the memoir Travelling to Infinity: My Life with Stephen by Jane Hawking, The Theory of Everything tells the extraordinary and uplifting story of one of the world’s greatest living minds and of two people defying the steepest of odds through love.

Eddie Redmayne was nominated for BAFTA’s Rising Star Award in 2012 for his continuing body of work. Subsequently, he shared a Screen Actors Guild Award nomination with his fellow actors from Tom Hooper’s Les Misérables for Outstanding Performance by a Cast in a Motion Picture, and the film itself won a Golden Globe Award for Best Motion Picture – Comedy or Musical. His other film credits include Simon Curtis’ My Week with Marilyn, opposite Michelle Williams; Robert De Niro’s The Good Shepherd, as the son of the characters portrayed by Matt Damon and Angelina Jolie; and Andy and Lana Wachowski’s upcoming sci-fi epic Jupiter Ascending. Mr. Redmayne is currently in production on his next movie: The Danish Girl, reuniting with director Tom Hooper, in which he will star as painter Einar Wegener. The London native has also attracted attention on stage. For his Broadway debut starring opposite Alfred Molina in John Logan’s Red, directed by Michael Grandage, he won the Tony Award for Best Featured Actor in a Play; the production won six Tonys overall, including Best Play. Mr. Redmayne also received a Theatre World Award and a Drama Desk Award nomination, and he won the Olivier Award for Best Supporting Actor for the production’s previous staging in London, at the Donmar Warehouse.

Felicity Jones won the Sundance Film Festival Special Jury Prize in 2011 for Drake Doremus’ romantic drama Like Crazy. The picture also won the Grand Jury Prize. She subsequently went on to win the Gotham Independent Film Award for Breakthrough Actor, the National Board of Review Award for Best Breakthrough Performer, and the Empire Award for Best Female Newcomer. In 2013, Ms. Jones was nominated for a British Independent Film Award for Best Actress for her performance in Ralph Fiennes’ The Invisible Woman; starring opposite Mr. Fiennes, she portrayed Charles Dickens’ beloved Nelly Ternan. Most recently, she appeared as the mysterious Felicia Hardy in Marc Webb’s blockbuster The Amazing Spider-Man 2. Ms. Jones’ upcoming movies include Rupert Goold’s True Story, with James Franco and Jonah Hill; Eran Creevy’s Autobahn, alongside Nicholas Hoult, Sir Anthony Hopkins, and Sir Ben Kingsley; and Juan Antonio Bayona’s much-anticipated drama A Monster Calls, also for Focus Features. She also has extensive stage experience. Her performance in Michael Grandage’s Donmar Warehouse revival of The Chalk Garden, in which she starred with Margaret Tyzack and Penelope Wilton, earned her an Evening Standard Award nomination for Outstanding Newcomer. Among her telefilm credits are Sir David Hare’s Page Eightand Salting the Battlefield, both opposite Bill Nighy.

'The Theory of Everything' | Trailer